:
March for Life 2022: Faith Leaders Unite in Support of Pro-Life Cause
Prophetic Vision: 'Mene, Mene, Tekel, Upharsin,' 'The Writing Is on the Wall'
Standing Up Against Latest Biden Attack on Military Heroes and More
'Remember That We're All Created in God's Image,' Texas Rabbi Taken Hostage Urges Americans
CN Top of the Week: Many Will Knowingly Take the Mark of the Beast; Here's How You Can Stay Vigilant
⇑ back to "Women"

Is The World Getting Worse?

Page 1 of 5
A former colleague disclosed his anxiety about the violence in the Middle East. Of particular concern for him were the brutal onslaughts against Christians by an organization known as ISIS. This terrorist organization that began as part of al Qaeda in Iraq has spread throughout Arab world. It has beheaded and brutally opposed anyone who differs from their fierce form of Islamic Fundamentalism.

Reflecting on some of the frightening news reports, he said,

"It is obvious to anyone with half a brain that the world is getting worse and worse. Evil is rising all around us and the Christian Church is losing ground. I can't believe how bad things are getting."

This acquaintance wasn't the only one that I've heard this kind of rhetoric from. Many have voiced a similar apprehension. You can hear it in the checkout lines, sports stadiums, and in the pews of our local churches. Multitudes are convinced that the world is presently in "freefall" and it's only a matter of time before everything falls apart.

Yet, is this true? Is evil actually growing throughout the earth? Is humanity descending into greater chaos and destruction?

Based on social media and television news reports, multitudes are convinced that the world is growing worse and worse. Yet, there's absolutely no evidence of this. By every measurable standard, life is improving around the globe. Darkness is fading and the goodness of God's Kingdom is truly taking root.

This statement isn't just a matter of opinion, but a reflection of verifiable statistics. Some of which I would like to share with you in the following article. Stay with me as I attempt to show how the world is actually getting better and better.

One way that the world is improving is through the diminishment of violence and brutality. Despite what is suggested by the media, violent deaths and bloodshed are currently the lowest ever recorded. Dr. Steven Pinker, Pulitzer prize-winning author and Harvard psychology professor noted that "Today we may be living in the most peaceful era in our species' existence."[1] 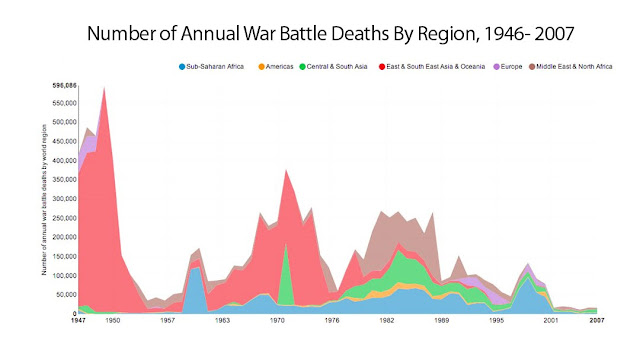 Prior to the Second World War, nations were continually in bloody conflict. Many Western European nations initiated war every two to three years. However, since the peak of the Cold War in the 1980s, civil wars, genocides, and terrorist attacks—have significantly diminished throughout the world.

"By any standard, the world is nowhere near as genocidal as it was during its peak in the 1940s, when Nazi, Soviet, and Japanese mass murders, together with the targeting of civilians by all sides in World War II, resulted in a civilian death rate in the vicinity of 350 per 100,000 per year...The trend lines for genocide and other civilian killings, fortunately, point sharply downward. After a steady rise during the Cold War until 1992, the proportion of states perpetrating or enabling mass killings of civilians has plummeted." [2]

We're not just seeing a reduction in war and civil conflict, there is also a remarkable drop in homicides and violent crimes around the globe. Pinker writes,

"England, Canada, and most other industrialized countries have also seen their homicide rates fall in the past decade. Among the 88 countries with reliable data, 67 have seen a decline in the past 15 years...Rates of rape or sexual assault and of violence against intimate partners have been sinking for decades, and are now a quarter or less of their peaks in the past."[3]

Archeologists and anthropologists have surmised that over 15% of society died violently in previous centuries. More recently this number has dropped down to 3%. In the Twenty-First Century less than 1% have died a violent or war-related death.[4] 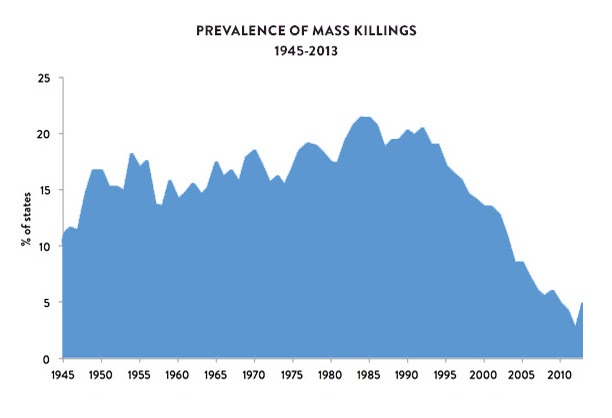 With this surprising developments in mind, Pinker argues that,

"Violence has been in decline for thousands of years, and today we may be living in the most peaceable era in the existence of our species."[5]

Pinker acknowledges that many are inclined to dismiss his observations. It contradicts what the news anchors and talking heads have presented. Nevertheless, the data actually reveals that the world is becoming a much safer place. Summarizing his findings, Pinker writes that,

"The world is not falling apart. The kinds of violence to which most people are vulnerable—homicide, rape, battering, child abuse—have been in steady decline in most of the world. Autocracy is giving way to democracy. Wars between states—by far the most destructive of all conflicts—are all but obsolete. The increase in the number and deadliness of civil wars since 2010 is circumscribed, puny in comparison with the decline that preceded it, and unlikely to escalate."[6]

Watch Steven Pinker share some of his insights on the reduction of world violence at the 2007 TEDTalk in Monterey, California.

Sadly, violence and bloodshed remain a part of our world, but it is much less pronounced than it was in previous eras. Things are clearly getting better. While many Americans are busy yelling and screaming, amazing things are quietly being established around the world.

in Your Inbox
Charisma — Empowering believers for life in the Spirit
© Copyright 2022 Charisma Media, All Rights Reserved.