:
Michael Brown: Thoughts on Patriotism and the Olympic Games
Anne Graham Lotz Places Son 'In the Arms of Jesus' as He Battles COVID From ICU
Regulating the Cute Little Bear Cubs That Have Come of Age as Big Tech
Spirit-Filled Pastor's Response to Mackenzie Morgan Calling Out Hillsong, Bethel and Elevation
Mike Huckabee, Paula White-Cain and Others Offer Early Praise for Stephen E. Strang's Newest Book, 'God and Cancel Culture'
⇑ back to "The Strang Report"

The only remaining national Christian bookstore chain, Mardel Christian & Education, has just celebrated its 40th anniversary. I got to know its founder, Mart Green, at publishing conventions back in its early days. It's been exciting to see the chain grow to 38 stores in 11 states. Each store averages 25,000 square feet. That's about half the size of a Hobby Lobby—and huge by Christian bookstore standards.

Mardel has always been known for quality. In my opinion, it has one of the best Bible sections in the retail world. The chain has expanded to include not only Christian books but also educational supplies, hence the name Mardel Christian & Education.

Mart Green has distinguished himself over the years, most notably as chairman of the board of Oral Roberts University in 2008 when his family came to the rescue of the then-beleaguered institution with a $70 million donation. He is also a filmmaker and an extraordinary entrepreneur and philanthropist.

He grew up in a retail environment, as his family started Hobby Lobby from scratch in the early 1970s. Then at age 19, he launched out on his own company and picked a name that incorporated part of his first and middle names. I remember thinking how creative that was when I heard about it in the early days.

Back then, I only knew of Mardel. Hobby Lobby was less than 10 years old at the time, and since most of their stores were located in states adjacent to their Oklahoma headquarters, I wasn't personally familiar with the chain. But I did know Mart through the publishing industry, and I've always admired him. Over the years, Mardel has been a valued customer for our publishing house. 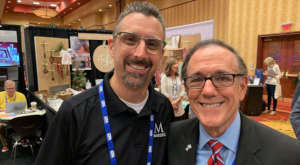 When I heard about the retail chain's 40th anniversary, I recognized its significance and invited Mardel's current CEO, Jay DePalmo, to record an episode of the Strang Report podcast. I'd met Jay at a trade show a few years ago and took a photo with him, shown here.

In 40 years, Mardel has expanded to 11 states, including Oklahoma, where the chain started; Texas; Arkansas; Colorado; Kansas; Missouri; Louisiana; South Carolina; Virginia; Nebraska and its newest store in West Virginia.

In our interview, I was also interested to learn more about Jay's philosophy of serving local stores—and how Mardel has survived when other stores have closed or find themselves in decline.

"What I think has been the biggest thing that's helped us is the fact that we have diversified into more than just books," DePalmo said. "You mentioned the education piece of it, and we are a big supplier of education supplies. ... We sell everything from bulletin board sets to trimmers to all the different things teachers would need to decorate their classroom. So we have a lot of different aisles. ... And part of that is also homeschool. So, we have some homeschool workbooks; we have a little bit homeschool curriculum; we have different things like that, which really helped broaden and diversify who we were as a company, which has helped over the years.

Mardel's sales of Christian and faith-based apparel have also helped the company diversify and remain strong, DePalmo said. "Our apparel sales have continued to grow every single year. And so a lot of those things have helped us to stay sustainable. ... Retail changes, and the things that people buy change, and so you have to be fluid and move, be willing to go with the trends and the changes that happen."

I asked DePalmo about Mardel's extensive Bible section, which I especially appreciate as a lover of God's Word and publisher of the Modern English Version of the Bible.

"We try to carry just the best selection that we can and try to make sure we have all the bestsellers covered," he told me. "And we have everything from a really expensive goatskin Bible for that customer who really wants a really nice expensive Bible, all the way down to a more economical Bible. In the stores where there's enough room, and most of them have this, we have a table set up in the Bible section where [customers] can take out a couple different Bibles and open them up and compare them."

DePalmo shared a fascinating story about how the Holy Spirit led him to apply at Hobby Lobby. He started in retail, although he thought he was going into full-time ministry. He supported himself through his time at Rhema Bible College in the Tulsa, Oklahoma, area by working for a grocery chain, continuing there even after he graduated.

"The Lord was not leading me to go anywhere else, but just to be faithful," he said.

But about this time, the grocery chain where he worked started having some problems. He had just gotten married and was praying about what to do.

One day while driving in Tulsa, he looked over and saw a sign that read, "Hobby Lobby" in front of one of the chain's stores.

"As soon as I saw that sign, I just sensed the Lord in my heart—these words—and it was, 'Go in and apply,'" he said. "And that was really all I had. That's all He said. That's all I heard, but it was real. I didn't hear anything audible or anything like that. It was just in my spirit, but I knew it was God. And I knew it was the Holy Spirit."

DePalmo turned his car around, went into the store and picked up an application. The Spirit's prompting thus began a series of events that led to him joining Hobby Lobby as a co-manager.

I asked DePalmo what Mardel is doing to celebrate this big anniversary. He told me company officials actually started thinking about that in 2019, but then 2020—and the COVID-19 pandemic—interrupted their plans.

"We were looking ahead to year 40, but the problem was that year 39 was kind of a crazy year," he said. "A lot of crazy things happened in the world, and so that was one of the things that kind of got put on the backburner.

"By the time we got in the realm of everything and realized what was upon us, we didn't really do a lot of big fanfare, a lot of big parties or anything like that," DePalmo said. "But one of the things we did want to do is to make sure that we let our customers know that we have been around for 40 years.

"So, we have done a lot of banners on our ads and our emails," he said. "We put a nice sign up in all the stores about the 40th anniversary, and I think that really helps, especially in some of the markets where we have new stores and our customers are just getting to know us for the first time. It makes them realize that this company has been around for a little while."

The fact that Mardel is still going strong after all these years is a tribute to the company's great customer base. I've said this before, and I'll say it again: Christian people need to help Christian people, especially right now during this cancel culture mess. The enemy is doing his best to stamp out the Christian witness in our culture, and Christian bookstores are lighthouses in their communities.

The number 40 is a very special number in the Bible. In a culture where things are changing so fast and nobody seems to want to know about or remember our history, I think it's good when we stop and just say, "Thank You, Lord," for 40 years and marvel at what has happened in our lives.

We need to do that, especially in the face of the reality that many Christian bookstores—and other Christian businesses, for that matter—have gone by the wayside in the past few years due to financial difficulties. Since I've been in the industry more than four decades, I enjoyed talking with DePalmo in the podcast about trends that have shaken Christian publishing to its core.

I believe we need to support each other. I do my part to try to encourage people as I have the opportunity to do it. I have opened my own account on mardel.com, and I encourage you to do so as well. You'll also want to do as I have and download the Mardel App on your mobile device, available on the AppStore or Google Play.

On a personal note, I was interested that Mardel's actual start date was June 1, 1981. I didn't know that until we recorded the podcast. That is the same day our Charisma Media corporation began. I mentioned that in the podcast because I see it as a divine coincidence. I congratulate Mardel Christian & Education stores on this milestone and pray the firm continues to prosper in the future.